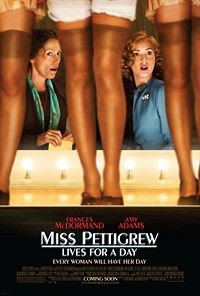 There is no real connection between Winifred Watson, the author of Miss Pettigrew Lives for a Day and Jane Austen, except for the fact that they both wrote six novels in their lifetime. Our beloved Jane's life was cut short, and so, to our immense sorrow was her output of her works of genius. Winifred Watson, on the other hand, chose to give up her writing when her son was born. She felt she would not be able to devote herself properly to the task of looking after her child and had no inclination to write once she became a mother.
Miss Pettigrew Lives for a Day is a lovely book, made even more so if you can get hold of a copy with the original 1930's illustrations. It's what I call a real comfort read and I defy anyone not to enjoy it.
Yesterday, a friend and I treated ourselves to an afternoon at the cinema, something, I must admit, that feels rather decadent in the afternoon, especially as we also treated ourselves to lunch. I knew little about this new film version and I did wonder if it would do justice to this delightful tale. Both Jenny and I thought it was wonderful, we laughed and cried, and came out of the cinema feeling happier than when we went in. Purists will notice the odd change, but there is nothing that jars and the spirit of the book remains true. We enjoyed it so much I had to write and tell you all, because I think you would too!
All the actors and actresses were marvellous, but none more so than the man I can never think of as anyone but Captain Wentworth, Ciaran Hinds. He makes a truly romantic hero!