Is this a portrait of the Austen family in 1781?

Monday, March 21, 2011
The ‘Conversation Piece’.
Is this a portrait of the Austen Family in 1781?
Whilst conducting research into the ‘Rice’ portrait, Mr. Robin Roberts discovered a very interesting picture, which seems to have gone unnoticed in a Christie’s catalogue. The sale of the property of Mrs. Robert Tritton took place at Godmersham Park, Kent, between Monday, June 6th and Thursday, June 9th, 1983. Elsie Tritton and her husband had bought the estate in 1936, and the catalogue notes how she and her husband had lovingly rescued the house, and how Elsie, a New Yorker by birth, wished that after her death, their wonderful collection of furniture and clocks, English Conversation Pieces, objets d’art and textiles should be available for others to buy for their own collections. This is a fascinating catalogue to see, and I think the fact that the painting came out of the sale of Godmersham Park is most exciting! Click on the pictures to see a larger image.
The painting is described in the catalogue as belonging to the English School, circa 1780, pen, and black ink and watercolour, measuring 15½ by 19½ inches. It depicts a family sitting round a table, the adults at opposite ends, with four children beyond.
I think what’s so interesting about the picture is that the more you study it; the more the details become fascinating. It appears to be a wonderful allegorical puzzle, full of the humour and charade that the Austen family loved, reflecting so much of what we know about their family history, and finances, with all the literary symbolism they would have enjoyed so much. There are some significant allusions connected with the Austen family, and I am thrilled to share Mr. Roberts’ thoughts and discoveries with you.
He wonders if it could possibly be a work by Ozias Humphry painted to commemorate the adoption of Edward Austen by the Knight family who were childless relatives, and executed at a similar date as the commemorative silhouette.
What could be the monogram symbols of Ozias Humphry appear to be scattered in several places about the painting, on the figures, in a curlicue above the mantelpiece, and there is a possible signature in the right hand corner, though it is difficult to be certain without seeing the original, and unfortunately, it is impossible to show all the small details on a blog.

If we assume that this is a painting of the Austen family, the central figure shows a young boy who is most likely to be Edward Austen. The family all have their attention turned towards him, and more importantly, their eyes are concentrated on the bunch of grapes, which he holds high up in the air, as if being presented to the viewer. You can almost hear him say, “Look at me, am I not the most fortunate boy in the world? Look what I have!”
Surely the grapes represent the good fortune and wealth that Edward is about to inherit, and the whole family who look as pleased as punch are celebrating with him. 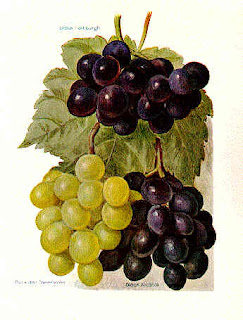 George Herbert makes the connections between grapes, fruit, and inheritance in his poem, The Temple.
From The Temple by George Herbert, 1633
An extract from The Bunch of Grapes:
Then have we too our guardian fires and clouds;
Our Scripture-dew drops fast:
We have our sands and serpents, tents and shrowds;
Alas! our murmurings come not last.
But where’s the cluster?  where’s the taste
Of mine inheritance?  Lord, if I must borrow,
Let me as well take up their joy, as sorrow.
But can he want the grape, who hath the wine?
I have their fruit and more.
Blessed be God, who prosper’d Noahs vine,
And made it bring forth grapes good store.
But much more him I must adore,
Who of the Laws sowre juice sweet wine did make
Ev’n God himself being pressed for my sake.
As we observe the painting, the small girl with round cheeks to the left of Edward must be Jane Austen herself! This is also one of the most significant parts to the puzzle. She appears to be clutching what could be a horseshoe nail in her hand, which she points towards Edward, her arm held high in the same way as he holds his grapes aloft. This is where it gets most exciting, and where another connection to Edward Austen is made. On the painting of Edward Austen at Chawton House, there is most distinctly, a horseshoe nail on the ground pointing towards Edward’s feet. Mr. Roberts tells me that this little nail is a symbol, an allusion to the fact that the Knights adopted him. Most interestingly, Jane makes reference to the horseshoe nail in a letter dated Tuesday, 9th February, 1813. She is talking about Miss Clewes, a new governess that Edward has engaged to look after his children.
Miss Clewes seems the very Governess they have been looking for these ten years; - longer coming than J. Bond’s last Shock of Corn. – If she will but only keep Good and Amiable and Perfect!  Clewes & (sic) is better than Clowes. And is it not a name for Edward to pun on? – is not a Clew a nail?
Jane was punning on the word clew (or clue) and the Old French word, clou (de girofle), which in its turn was derived from the Latin, clavus, meaning nail (of the clove tree). The dried flower bud of the clove tree resembles a small nail or tack. Of course, it was a name for Edward to pun on because of his own associations with a small horseshoe nail.
Now we turn to the gentleman on the left of the painting who is dressed exactly as Mr. Austen in the silhouette attributed to Wellings of Edward’s presentation to the Knight family. He is seated, hands clasped together as though offering up a grateful prayer for their good fortune. Within his grasp it appears he is holding a prayer book, or missal, the silk ribbon of which is draped over his fingers, an indication perhaps of his status as rector, and a man of the cloth. Interestingly, he is the only figure whose eyes are not concentrated on the bunch of grapes, but perhaps this is to indicate he is more concerned with offering grateful thanks in his role of clergyman.
In between Mr. Austen and Jane is Cassandra who rests her hand protectively on her sister’s shoulder, whilst also providing an excellent compositional device leading the eye along through to Jane’s arm to the tip of the Golden Triangle where the bunch of grapes are suspended. The painting follows the traditional composition based on a triangle for optimum placing of the main interest of the work. I also think it interesting to note that the girls’ dresses are of the simple muslin type usually worn by children at this time. Mostly white, they were worn with a ribbon sash, at waist height or higher as in Jane’s case.
On the other side of Edward, it is thought this child most likely to be Francis. James would have been at school at this time, and Henry could also have been away. Charles was too young to be depicted, and would still have been lodged with the family who looked after the infant Austens, as was the custom.
To the far right, as we look at the painting is the formidable figure of Mrs. Austen dressed for the occasion with a string of pearls and a ribbon choker around her neck, complete with more than one ‘feather in her cap’, which must represent her pride and pleasure at the whole event, and by extension, the symbols of nobility and glory. She is further emphasizing Edward’s importance by pointing in his direction, and I think it would be hard to imagine a more pleased mama, in her elegant air, and her smile. 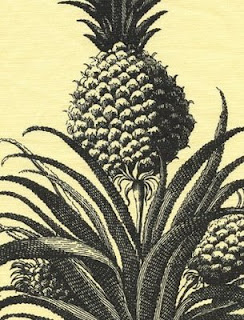 On the table is a further connection with Mrs. Austen. The pineapple, a prized fruit, representing health and prosperity, was first introduced to England in 1772, and the Duke of Chandos, Mrs. Austen’s great uncle, was the first to grow them. The symbolism of the pineapple represents many things, not least the rank of the hostess, but was also associated with hospitality, good cheer, and family affection.
Other dishes of food illustrate further abundance, wealth, and the spiritual associations of Christian values. There is bread and wine on the table: Christian symbols, which represent not only life, and the Communion, but also show there is cause for thankfulness and celebration. The glasses are not yet filled, but there are glasses placed before the adults for a toast. Nearest to us in the foreground, there is another fruitful dish, perhaps plum pudding, representing not only the wealth to come, but also a plentiful future. Placed before Edward, another dish, which also appears to suggest the image of a spaniel dog, may be an allusion to Edward’s love of hunting.
The background to the painting holds its own clues. It’s been suggested that the painting above the mantelpiece could be Zeus abducting Ganymede to the Gods, another reference to the luck of young Edward who has been adopted by the Knight family, and on the opposite wall, could this be a reference to the miniature portrait of George Austen, the handsome proctor, even if this appears to be a larger portrait? In the carpet, the patterns suggest the date may again be replicated, and also an M to symbolize the fact that the couple in the painting are married. Above the looking glass is a crest with what appears to be the date. It would be lovely to have a look at the original to see everything in more detail!
Unfortunately, there appears to be no record of the sale of the painting, and I know that Mr. Roberts, and his sister, Mrs. Henry Rice, would be interested to learn more about the painting. They've asked me to make an appeal on their behalf for any information, and if anyone knows of the painting’s whereabouts or can tell us anything about it, please do get in touch with me or with Jane Austen’s House Museum.
My contact details are at the top left of the page.
I hope you’ve enjoyed this blog as much as I’ve enjoyed hearing all about this little painting from Mr. Roberts and Mrs. Rice, and I'd like to thank them for sharing their discovery.
I’d love to hear your thoughts!