Wednesday, June 15, 2011
In the first of a new series of blog posts, I'd like to welcome Mrs. Henry Rice who is going to be telling us all about the provenance of the 'Rice' Portrait of Jane Austen. Written in her own words is her account taken from letters and documents which her husband Henry Rice collated over many years. I'm sure you will enjoy reading this fascinating insight as much as I have!

The Rice Portrait Provenance - Its Owners by Mrs. Henry Rice

This story, and the portrait of Jane Austen started in the summer of 1788 when George Austen took his wife, and his two young daughters, Cassandra aged 15, and Jane aged not quite 13 years old to visit their Great Uncle Francis Austen at his home called The Red House in Sevenoaks, Kent. Francis Austen was an enormously rich and successful man, he had been head of Lincoln's Inn in London, and owned properties in Essex, as well as in Kent. He was an expert in the settling, and safeguarding of large estates by entail, and by inheritance, and counted some of the most important families in England amongst his clients; the Dorsets, the Berkeleys, and Cravens, amongst others.
In 1788, he was 90 years old, having been born in 1698 in the reign of Queen Anne. His second wife Jane had been Jane Austen's godmother, but was now dead, and Francis was indulging himself in his old age as a benevolent family patriarch. Ozias Humphry, much patronised by Francis's main employer and patron, the Duke of Dorset had already painted him at the Duke's request once, and at his own once again for The Red House.
Francis had always been a kind and generous patron of his nephew George Austen. It is hardly surprising that he was persuaded, or perhaps cajoled, into commissioning the portraits of his two great nieces from his friend Ozias, who was rather down on his luck at the time having returned from India in the spring of 1788, with little success and somewhat short of money. Ozias always demanded half his fee for his portraits 'up front', his accounts show that he charged about 13 guineas first, and the second half on completion. He made a note of Francis Austen's death in 1791, which implies money owing to him.
The family has always believed that after the portraits of Cassandra and Jane were commissioned in the summer of 1788, Ozias Humphry stayed at Godmersham Park that autumn, and there executed sketches and drawings of the backgrounds in the park. On the 7th October that year Edward Austen-Knight was 21 years old, and again family tradition has it that he returned from the first leg of his Grand Tour for his Coming of Age celebrations with his adoptive parents. His own portrait, also signed OH, places him within the Godmersham grounds in front of a large English oak tree,  the old temple ruins in the background, and also graves from Godmersham churchyard.
Jane's background includes the river Stour that flows to the left of the big house, and in both pictures the same autumnal colours are used, as well as the depiction of stormy skies. It's interesting to note the stance in both of the portraits, the angles of the cane and the parasol are almost identical. Ozias having been trained as a miniaturist and a very fine one, had difficulty in many of his paintings in the execution of limbs painted in large. Note the elongation of Edward's arm holding his hat, and Jane's elongated arm holding the parasol.
As with much of the inherited Austen artefacts and documents, over time they were split amongst family members. The last descendant of the Kippington Austen line may well have owned the portrait of Cassandra. May Harrison lived out her final years in Grasse, France, and on November 28th 1952 she wrote to R.W. Chapman saying she owned by descent, a portrait which she believed could be Jane Austen. Mrs. Harrison's nephew remembers her possessing a painting of a girl dressed in white, but it was not always hung as she rotated her pictures. No one seems to have considered that this could have been the portrait of Cassandra, but I shall be writing more about this story later on. 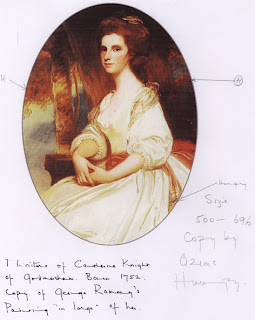 As was the usual custom Ozias would have finished the portraits in his London studio, and kept them until he received payment for the second tranche of the paintings. Thomas Knight is believed to have commissioned Edward's portrait, (Ozias certainly copied the Romney portrait of his wife Catherine Knight for him. It is a small oval miniature that he could carry with him.)
Uncle Francis died in 1791, and the two portraits were inherited by his eldest son, Francis Motley Austen, the second owner of the portrait.
Anne Rice June 2011

Next time, Mrs. Rice will be writing about Francis Motley Austen, the second owner of the portrait.