A stroll along the Gravel Walk and the Circus in Bath

Tuesday, August 30, 2016
We've been enjoying some fantastic weather in Bath lately, though I would not be telling the truth if I didn't mention the occasional shower, and some downpours too! Even Captain Wentworth remarks on the frequency of rain in Persuasion: I love the scene when they meet unexpectedly in Molland's and endure a very flustered conversation, both of them not quite reading the other's thoughts or feelings.
After a moment's pause, he said: "Though I came only yesterday, I have equipped myself properly for Bath already, you see" (pointing to a new umbrella); "I wish you would make use of it, if you are determined to walk; though I think it would be more prudent to let me get you a chair."
However, we will not dwell on the rain, but on Bath's beautiful environs and the sunshine over the Bank holiday weekend. It's an easy place to find a wealth of pictures in the classical architecture, and yesterday my husband and I strolled along the Gravel Walk where Anne Elliot and Captain Wentworth find themselves, having ironed out all the misunderstandings, after that magical letter in Chapter Twenty Three. 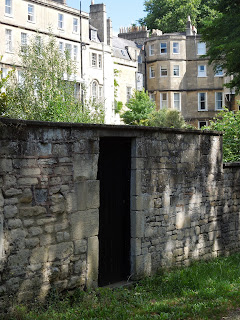 All along the Gravel Walk you can see the backs of the houses on Gay Street, The Circus and Brock Street. The trees provide a lot of shade on a hot day, and dapple the path with spots of light. 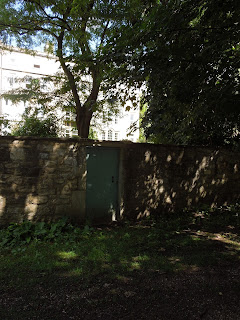 I love the contrasts of light and shade, and looking at the different styles of architecture at the back of the houses. From the front, they all look very uniform. 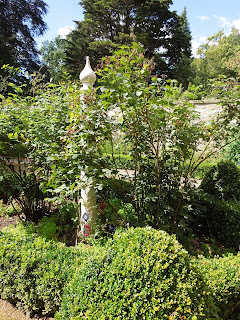 In the summer months there is a Georgian Garden along the Gravel Walk open to the public, and set out in the style of the period with carefully selected plants. 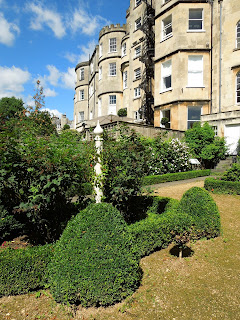 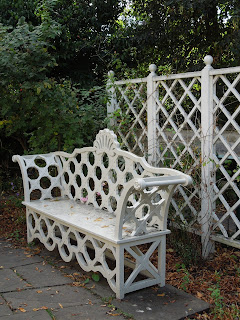 Trellis and a garden bench in the Georgian Garden. 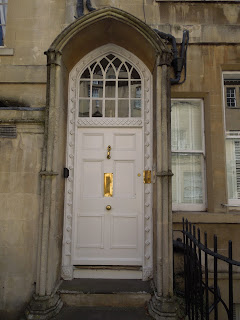 Once out at the top of the Gravel Walk it's one way to the Royal Crescent, which is covered in scaffolding at the moment or along Brock Street, which has many lovely architectural features, and interesting doorways. Here's a wonderful example of a Gothic window. 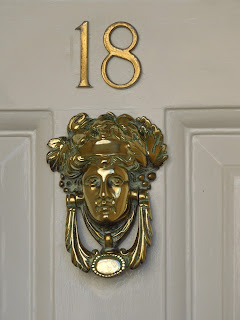 I'm always fascinated by the fabulous array of door knockers in Bath. Isn't this one a gorgeous example? 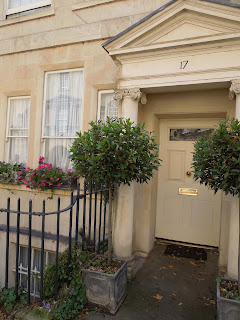 This is a pretty example of the type of doorway to be found along Brock Street. 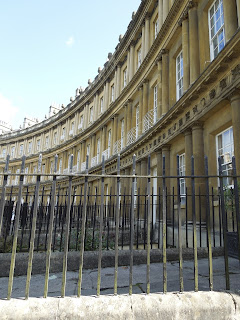 It's a short walk from Brock Street to the Circus designed by John Wood and his son, and completed in 1768. 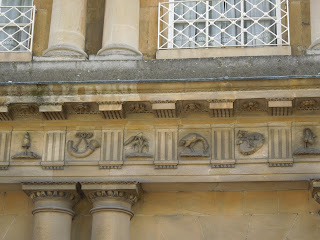 A detail of the frieze

Finally, here's the moment from Jane Austen's Persuasion when Anne and Frederick find themselves at the Gravel Walk, together at last.

There could be only a most proper alacrity, a most obliging compliance for public view; and smiles reined in and spirits dancing in private rapture. In half a minute Charles was at the bottom of Union Street again, and the other two proceeding together: and soon words enough had passed between them to decide their direction towards the comparatively quiet and retired gravel walk, where the power of conversation would make the present hour a blessing indeed, and prepare for it all the immortality which the happiest recollections of their own future lives could bestow. There they exchanged again those feelings and those promises which had once before seemed to secure everything, but which had been followed by so many, many years of division and estrangement. There they returned again into the past, more exquisitely happy, perhaps, in their reunion, than when it had been first projected; more tender, more tried, more fixed in a knowledge of each other's character, truth, and attachment; more equal to act, more justified in acting. And there, as they slowly paced the gradual ascent, heedless of every group around them, seeing neither sauntering politicians, bustling house-keepers, flirting girls, nor nurserymaids and children, they could indulge in those retrospections and acknowledgments, and especially in those explanations of what had directly preceded the present moment, which were so poignant and so ceaseless in interest. All the little variations of the last week were gone through; and of yesterday and to-day there could scarcely be an end.