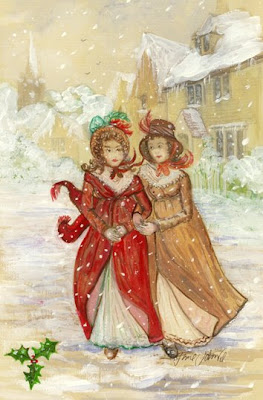 I am really thrilled to be able to tell you that my second novel, Mrs Brandon's Invitation will be published by Sourcebooks next year. It will be coming out in September, which seems such a long time to wait to see it in print, but will fit so perfectly within the time frame of the book, that I will just have to learn to be more patient.
As the title suggests, Mrs Brandon's Invitation is a sequel to Jane Austen's Sense and Sensibility. The story principally centres around Marianne (nee Dashwood) who has been married to Colonel Brandon for three years and that of her younger sister Margaret, but most of the characters are there with a few new ones. I have so enjoyed writing this one, interweaving the stories of two heroines against the backdrops of Delaford in the Autumn, Lyme and London in winter. It was such fun to write the characters of Mrs Jennings and Lucy Ferrars, along with her sister Anne Steele. Colonel Brandon's sister, husband and son make an appearance at Whitwell and this is where the mischief starts. I am often inspired by a secondary character or mention of one in the original books and I decided to introduce the family. If you remember, Mrs Jennings refers to Colonel Brandon's sister as residing in Avignon at the time of Sense and Sensibility. With her son Henry coming home from university, it was time to bring the Lawrence family back to Whitwell.

Here is a little taster of what is to come.

No one is more delighted by the appearance of an eligible suitor for her sister Margaret Dashwood than Marianne Brandon, until it becomes clear that not only the happiness of the match, but also that of her own marriage are bound and ensnared by the secrets and lies that belong to the past. First attachments, false impressions, resentments and misconceptions, are the elements that conspire to jeopardise the happiness of the Brandon family at Delaford Park, along with the added predicament of Mrs Brandon's first love John Willoughby returning to the neighbourhood.