Monday, November 03, 2008
My new book which is a Sense and Sensibility sequel has a new title, Willoughby's Return, a tale of irresistible temptation'. It is to be published by Sourcebooks next autumn, so I am very excited about that! Here's a little taster:

When Marianne Dashwood weds Colonel Brandon both are aware of the other’s past attachments; Marianne’s grand passion for the charming but ruthless John Willoughby and Brandon’s tragic amour for his lost love Eliza. Three years on Marianne is living with her husband and child at Delaford Park, deeply in love and contented for the most part, although Marianne's passionate, impulsive and sometimes jealous behaviour is an impediment to her true happiness. News that John Willoughby and his wife have returned to the West Country brings back painful memories for Marianne and with the demise of Mrs Smith of Allenham Court comes the possibility of Mr Willoughby and his wife returning to live near Barton and the surrounding area of Devon and Dorset, a circumstance which triggers a set of increasingly challenging, yet often amusing perplexities for Marianne and the families who live round about.

I do not think there is another of Jane Austen's anti-heroes who receives such a promising and lengthy description as Mr John Willoughby, which instantly conjures up a picture of a gallant suitor. I have italicised the parts which refer to his looks and manner in Chapter nine of Sense and Sensibility when we are first introduced to him. No wonder Marianne was completely smitten by him! 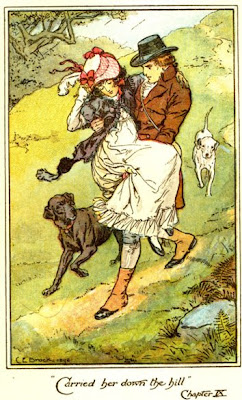 They set off. Marianne had at first the advantage, but a false step brought her suddenly to the ground, and Margaret, unable to stop herself to assist her, was involuntarily hurried along, and reached the bottom in safety.

A gentleman carrying a gun, with two pointers playing round him, was passing up the hill and within a few yards of Marianne, when her accident happened. He put down his gun and ran to her assistance. She had raised herself from the ground, but her foot had been twisted in the fall, and she was scarcely able to stand. The gentleman offered his services, and perceiving that her modesty declined what her situation rendered necessary, took her up in his arms without farther delay, and carried her down the hill. Then passing through the garden, the gate of which had been left open by Margaret, he bore her directly into the house, whither Margaret was just arrived, and quitted not his hold till he had seated her in a chair in the parlour.

Elinor and her mother rose up in amazement at their entrance, and while the eyes of both were fixed on him with an evident wonder and a secret admiration which equally sprung from his appearance, he apologized for his intrusion by relating its cause, in a manner so frank and so graceful, that his person, which was uncommonly handsome, received additional charms from his voice and expression. Had he been even old, ugly, and vulgar, the gratitude and kindness of Mrs. Dashwood would have been secured by any act of attention to her child; but the influence of youth, beauty, and elegance, gave an interest to the action which came home to her feelings. 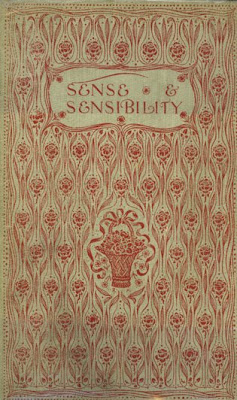 His manly beauty and more than common gracefulness were instantly the theme of general admiration, and the laugh which his gallantry raised against Marianne received particular spirit from his exterior attractions. Marianne herself had seen less of his person than the rest, for the confusion which crimsoned over her face, on his lifting her up, had robbed her of the power of regarding him after their entering the house. But she had seen enough of him to join in all the admiration of the others, and with an energy which always adorned her praise. His person and air were equal to what her fancy had ever drawn for the hero of a favourite story; and in his carrying her into the house with so little previous formality, there was a rapidity of thought which particularly recommended the action to her. Every circumstance belonging to him was interesting. His name was good, his residence was in their favourite village, and she soon found out that of all manly dresses a shooting-jacket was the most becoming. Her imagination was busy, her reflections were pleasant, and the pain of a sprained ankle was disregarded.