What was happening in Jane Austen's World in 1795? 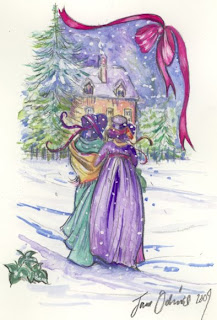 We've had some very wintry weather of late, which inspired this painting of Jane Austen and her sister Cassandra. They are walking in the snow near their first home, Steventon Rectory, in Hampshire.

When Jane Austen was nineteen, the winter of 1794/95 was exceptionally severe with very cold conditions setting in on Christmas Eve. The cold was most intense during January, the coldest on record. A rapid but temporary thaw, accompanied by heavy rain began on the 7th February, which resulted in much flooding across large areas of England - much as we seem to be experiencing at present. The severe cold returned after February 12th, and continued well into March with more snow.

For some time Jane Austen had been writing short pieces for the amusement of her family and attempted a novella, Lady Susan. She was possibly just starting work on the book that was to eventually become Sense and Sensibility, and which her sister remembered was first entitled Elinor and Marianne. Perhaps the bad weather spurred Jane on with her writing, especially when snow would have made it difficult to get about. Well, it's a lovely thought to think of her sitting at her desk watching the snow fall through the window as she dreamed up Mr Willoughby, Edward Ferrars and Colonel Brandon!

We are introduced to the Dashwood sisters in the first chapter. Their father has died and Austen shows us the girls' personalities by their reactions and behaviour. Someone has to keep the household together and cope with callers and guests. Whilst watching her mother and sisters indulge in their grief Elinor gets on with the job.

Elinor, this eldest daughter whose advice was so effectual, possessed a strength of understanding, and coolness of judgment, which qualified her, though only nineteen, to be the counsellor of her mother, and enabled her frequently to counteract, to the advantage of them all, that eagerness of mind in Mrs. Dashwood which must generally have led to imprudence. She had an excellent heart; her disposition was affectionate, and her feelings were strong: but she knew how to govern them: it was a knowledge which her mother had yet to learn, and which one of her sisters had resolved never to be taught.

Marianne's abilities were, in many respects, quite equal to Elinor's. She was sensible and clever; but eager in everything; her sorrows, her joys, could have no moderation. She was generous, amiable, interesting: she was everything but prudent. The resemblance between her and her mother was strikingly great.

Elinor saw, with concern, the excess of her sister's sensibility; but by Mrs. Dashwood it was valued and cherished. They encouraged each other now in the violence of their affliction. The agony of grief which overpowered them at first, was voluntarily renewed, was sought for, was created again and again. They gave themselves up wholly to their sorrow, seeking increase of wretchedness in every reflection that could afford it, and resolved against ever admitting consolation in future. Elinor, too, was deeply afflicted; but still she could struggle, she could exert herself. She could consult with her brother, could receive her sister-in-law on her arrival, and treat her with proper attention; and could strive to rouse her mother to similar exertion, and encourage her to similar forbearance.

Margaret, the other sister, was a good-humoured, well-disposed girl; but as she had already imbibed a good deal of Marianne's romance, without having much of her sense; she did not, at thirteen, bid fair to equal her sisters at a more advanced period of life.