In Pursuit of Pemberley and Mr Darcy! 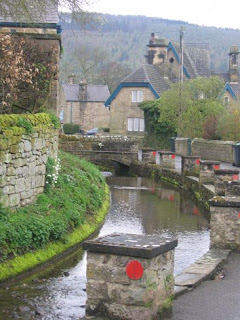 I've been to Derbyshire for a few days on a research trip - (that's my excuse anyway) with my lovely sister, her husband and my own. Derbyshire, of course, is home to Mr Darcy at Pemberley, and I wanted to see the landscape through Elizabeth Bennet's eyes if that was possible and to see if I could find Pemberley. I've tried to do this before and have never really found anywhere I thought fitted exactly what I imagine to be Elizabeth and Darcy's home, but wandering around places like Chatsworth and Haddon Hall is always a delight and very inspiring for my writing. I did see Mr Darcy - sort of - but I'll tell you about that later. 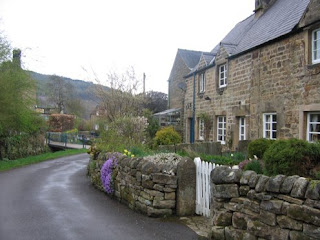 As I travelled through the Peak District it was easy to see why people still flock to this area for the splendid scenery and vast landscapes which are stunningly beautiful. On our first day we arrived at Beeley where we were going to stay in the Devonshire Arms which is still a part of the Chatsworth Estate and within walking distance of the great house itself. Everyone we encountered was so friendly and the warm reception from the staff made our visit such a pleasure.
Here's an extract from Discover Derbyshire and the Peak District about the village of Beeley. 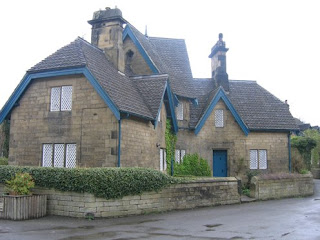 Beeley is a pretty, unspoilt village sheltered by Beeley Moor with wonderful views in all directions.

But things could have been very different. The old road to Chatsworth used to go through the heart of the village. It left by Pig Lane, so named because of a group of pigsties by the side of the road and crossing James Paine’s, Single Arch Bridge. Before the completion of the bridge in 1761, traffic crossed Mill Bridge, near the old ruined mill buildings in Chatsworth Park. Fortunately for Beeley, it has had a bypass for over a hundred years, effectively shutting out all the hustle and bustle of the Chatsworth traffic hurrying along the winding road. Most motorists hardly give the village a passing glance, which even to this day remains quiet, peaceful and relatively undiscovered.

It was only after the third Duke of Devonshire had bought Beeley Hill Top in 1747 that his successor embarked upon a grand plan to develop and landscape Chatsworth. Beeley then started to become part of the estate. Land and buildings were purchased as they came on the market, but this task took some time and was completed by the sixth Duke. Many of the properties have been sold off into private ownership in recent years as they became surplus to requirements.

Beeley had acquired its present shape and size by 1800. With the exception of a small group of properties built in recent years on the Chesterfield Road, it has remained remarkably unchanged for over 200 years. The same does not apply to the use of the buildings: the school, schoolhouse, post office and reading room are all now private houses. Dukes Barn built in 1791, to house the estate carts used to carry coal from Rowsley Station, is now a residential study centre, and available for hire by any educational group. 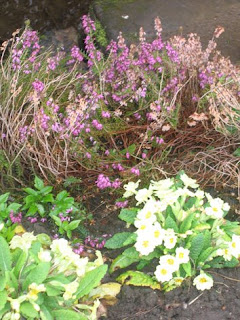 What makes the village so beautiful is that almost all the farm and domestic buildings are built from the same honey coloured sandstone, quarried locally close to Fallinge Edge. The local stone quarries once gave employment to a large number of men. The two quarries at Bruntwood produced stone not only of good appearance, but also of such hardwearing quality that it was used in many of the principal buildings in Manchester.

Many travel books featuring the Peak District do not mention the village, but do refer to Beeley Moor. On the heather clad moor, some 1,200 feet above sea level, are over 30 pre-historic barrows and cairns. Hob Hurst’s House is an unusual Bronze Age Barrow that attracts most attention. A small ring of five stones stands on a mound surrounded by a rectangular bank and ditch. When the barrow was excavated in 1853, scorched human bones were found and two pieces of lead ore. Various legends have sprung up including one that refers to ‘Hob’ as a kindly goblin who made his home in this barrow and gave assistance to the local community. 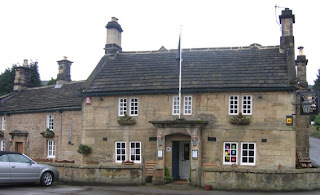 The delightful Beeley Brook enhances the village scene as it babbles its way cheerfully alongside the road, past the Devonshire Arms to a meeting with the River Derwent.