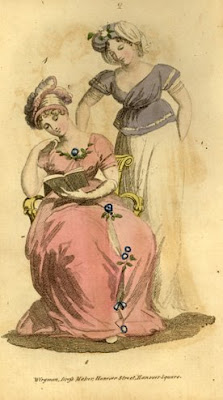 Lydia Bennet's Online Diary.
At this time of the year I always read Pride and Prejudice and I thought it would be fun to see what Lydia is thinking about all the goings on at Longbourn. Lydia's online diary starts just before Mr Bingley arrives and finishes where my novel, Lydia Bennet's Story, begins.
Wednesday, March 24th, 1802

Such a week! What adventures have befallen me in the last few days, and I am filled with such emotion that it is truly difficult to know how to set it all down. Indeed, it is far too much to write or recall - here is the first episode!
I set off for Meryton on Monday, having donned a new white muslin with exquisite embroidery, my crimson mantle and velvet bonnet which is trimmed with purple and in the turban style. I looked very well but for my gloves, which are so old that they disgraced the entire effect. No matter, on the whole I was pleased with my appearance and arrived at my friends’ house, very early, the morning being extremely dull, chilly and so windy I was half blown to my destination.
We were all so pleased to see one another and let out such shrieks of anticipation that I am surprised that the watchman was not summoned by Emma’s neighbours.
Harriet looked very elegant in a hat and coat of French grey velvet, very much the bride to be, I thought and Emma, perfect in a green pelisse and satin hat gave me a huge hug and said that she hoped I would approve of our escort.
Before I had a chance to question her, the door opened and in stepped George Wickham who declared he had never met with a finer sight than the one which he now beheld, and was soon handing us into Henry’s awaiting carriage. We bowled along the lanes with good speed, passing through Hatfield where I thought for a moment of Kitty and hoped she was having as much fun as her sister.
We were set down at last by the market place and agreed to meet up with the coach again at the White Hart for dinner in order to be ready to set back before dusk. Mr Wickham excused his presence by saying he was gone to meet with a fellow soldier and friend so we were left to do our shopping.
After purchasing cream silk for Harriet, Sarcenet for Emma and some delicious muslin for myself, we called on Madam Courbet the Mantua maker, who was expecting Harriet for a fitting. She was very pleased with the silk we had chosen and Harriet has left her chosen fashion plate, along with her measurements in her capable hands.
Along the High Street we found an exquisite shop full of bonnets, with straw hats in profusion. I settled at last on a high crowned straw trimmed with primrose coloured satin ribbon and white lace. It is utterly divine, but then a new bonnet cannot be anything else. No doubt, I shall abuse it in a week’s time when I am tired of the trimming or when a new one is to be had. Harriet has chosen an exquisite confection for her wedding hat and I would just die to wear something so beautiful. It is a bonnet of silk and net, bound round with a wreath of white flowers, topped with a veil of French lace, which will complement her dress beautifully.
You may imagine, dear reader, that by the time all this was accomplished it was time for a sit down dinner at the White Hart. Mr Wickham joined us along the way and a tremendous spread of dishes of pork, roast beef with onions and plates of cabbage was enjoyed before it was time to set off for home. Mr Wickham expressed some regret at not being able to spend some more time with his friend whom he had not seen for some years, prompting Emma to instantly advise him to stay a while longer, so that they could continue their conversation. After several protests from him and reassurances from her as to our welfare, he reluctantly gave in and waved us off from the cobbled yard of the inn. 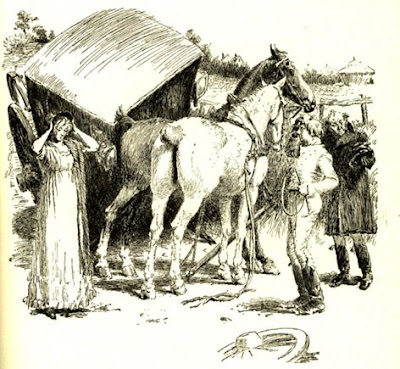 We left just after four, although still light, the weather was starting to become very foul and dirty, and with the wind gusting so hard that the carriage swayed from side to side. The rain drummed on the roof, making conversation difficult; we were feeling tired and being squashed in amongst the boxes was very tiresome. Shaw, the coachman, drove the horses hard with not a thought for the poor creatures inside his conveyance.Like pennies in the poor box we were jiggled until our heads ached, the very ribbons were shook from our bonnets and the brim of mine buckled from all recognition as a result of being repeatedly bounced against the interior. As if this was not enough, with great sudden alarm, we heard an enormous sound, like the earth being torn up and then all was confusion. A mighty oak, which looked to be hundreds of years old came crashing down on top of us, the horses reared, the coachman was thrown and the carriage turned over!