Thursday, April 22, 2010
Regular visitors to my blog know that I have a long-standing love affair with the City of Bath. We know that Jane Austen lived here from 1801-1806 and that her feelings about the place may well have been very mixed as time went on. I can feel a whole other blogpost coming on about Austen's feelings but I wanted to share some pictures that were taken of a walk from Lyncombe Hill to Combe Down. I have to thank Janet Aylmer for the directions to part of this walk. Her book In the footsteps of Jane Austen outlines a walk that Jane Austen took with a friend, Mrs Chamberlayne, through Bath to Lyncombe and Widcombe in May 1801. The book is annotated with lots of facts and pictures of Bath in Jane's time - a very enjoyable book and without it I would never have discovered this walk!
In a letter to her sister Cassandra, Jane wrote:

Tuesday 26 May 1801
...I walked yesterday morning with Mrs Chamberlayne to Lyncombe and Widcombe, and in the evening I drank tea with the Holders. - Mrs Chamberlayne's pace was not quite so magnificent on this second trial as in the first; it was nothing more than I could keep up with, without effort, & for many, many Yards together on a raised narrow footpath I led the way. - The Walk was very beautiful as my companion agreed, whenever I made the observation...

Now to my photos.

The first two show Lyncombe Hill, what was known as Lyncombe Lane in Jane's day. Believe me, the word hill is the better descriptive and I have to say at the start, this is not a walk for the faint-hearted! I'm not sure this pic of yours truly standing near the bottom really shows how steep it gets, but it does incline far more as you carry on up. The delightful pussy cat who I am sure must have been human in another life had quite a conversation with us - it also provided me with an excuse to stop and catch my breath - one of many! From here, it was downhill for a while before turning into Lyncombe Vale. 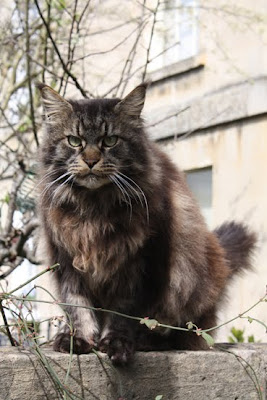 Now, the next photo shows me on the raised footpath which is most likely the very same one that Jane walked along with her friend. Opposite the path there is a terrace of pretty Victorian houses, but of course these would not have been there in Jane's day. On one side of the path runs a stream and beyond that there are fields and trees. 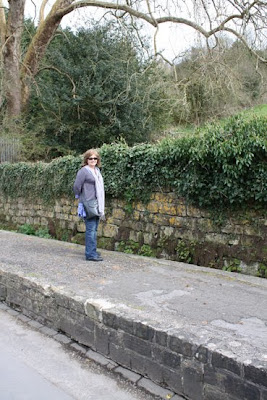 From Lyncombe Vale we turned into Perrymead or Pope's Walk where there are some interesting buildings and from here climbed ever higher. It tends to get a bit muddy here but the views are stunning and the air is scented with green shoots of wild garlic. Spring has only just arrived in this part of the world but there's nothing so lovely as spotting those new buds on the trees. 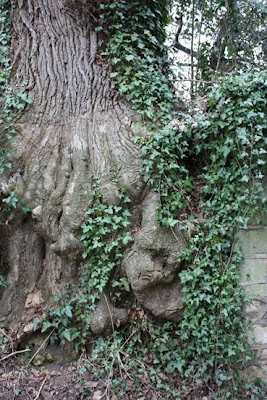 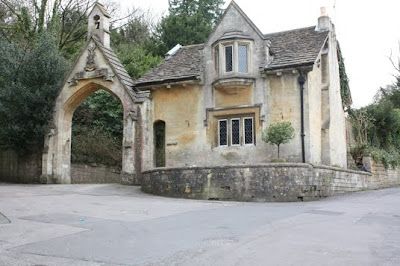 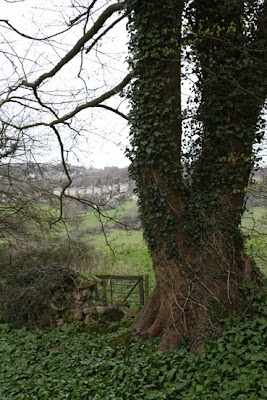 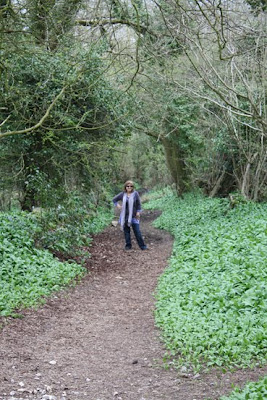 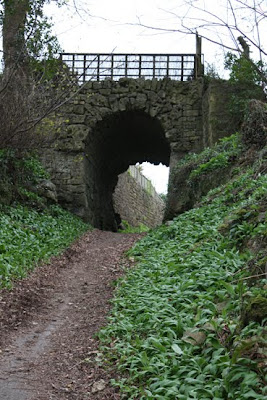 We came out at the top of Combe Down and after resting for a short while at a local pub for refreshment, we then took the short cut back down Prior Park Road to Widcombe. It did feel good to be walking downhill!